After some botched attempts at reestablishing routine, #MakeoverMonday week 21 got made within the time-boxed week!  I have one pending makeover and an in-progress blog post to talk about Viz Club and the 4 developed during that special time.  But for now, a quick recap of the how and why behind this week’s viz.

This week’s data set was straightforward – aggregated measures sliced by a few dimensions.  And to what I believe is now becoming an obvious trend on how data is published, it included both aggregated and lower dimensions within the same field (read this as “men,” “women,” “all people”).  The structured side of my doesn’t like it and screams for me to exclude from any visualizations, but this week I figured I’d take a different approach.

The key questions asked related to alcohol consumption frequency by different age and gender combinations (plus those aggregates) – so there was lots of opportunity to compare within those dimensions.  More to that, the original question and how the data was presented begged to rephrase into what became the more direct title (Are Britons Drinking Less?)

The question really informed the visualizations – and more to that point, the phrasing of the original article seemed to dictate to me that this was a “falling measure.”  Meaning it has been declining for years or year-to-year, or now compared to then – you get the idea.

With it being a falling measure and already in percentages, this made the concept of using an “difference from first” table calculation a natural progression.  When using the calculation the first year of the measure would be anchored at zero and subsequent years would be compared to it.  Essentially asking and answering for every year “was it more or less than the first year we asked?”  Here’s the beautiful small multiple:

Here the demographics are set to color, lightest blue being youngest to darkest blue being oldest; red is the ‘all.’  I actually really enjoyed being able to toss the red on there for a comparison and it is really nice to see the natural over/under of the age groups (which mathematically follows if they’re aggregates of the different groups).

One thing I did to add further emphasis was to put positive deltas on size – that is to say to over emphasize (in a very subdued, probably only Ann appreciates the humor behind it way) when it is anti-the trend.  Or more directly stated: draw the readers attention to different points where the percentage response has increased.

So older demographics are drinking more than they used to and that’s fueled by women.  This becomes more obvious to the point of the original article when looking at the Teetotal groups and seeing many more fat lines.

Here’s the calculation to create the line sizing: 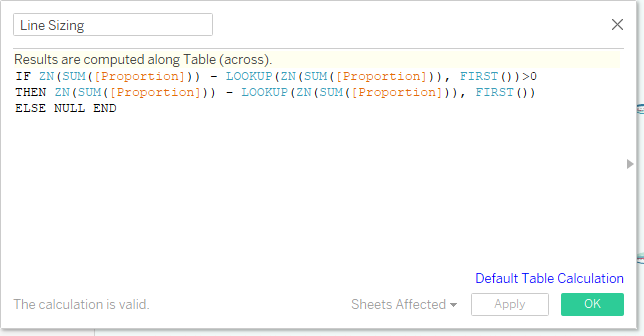 Last up was to make one more view to help sell the message.  I figured a dot plot would mimic champagne bubbles in a very abstract way.  And I also thought open/closed circles in combination with the color encoding would be pleasant for the readers.  Last custom change there was to flip the vertical axis of time to be in reverse.  Time is read top down and you can see it start to push down to the left in some of the different groupings.

If you go the full distance and interact with the dashboard, the last thing I hope you’ll notice and appreciate is the color legend/filter bar at the top.  I hate color legends because they lack utility.  Adding in a treemap version of a legend that does double duty as highlight buttons is my happy medium (and only when I feel like color encoding is not actively communicated enough).