{witty intro}  This week’s makeover challenge was to take Sydney ferry data for 7 ferry lines and 8 months.  What’s even better is there was another dimension with a domain of 9 members.  This is a dream data set.  I say it’s a dream from the perspective of having two dimensions that can be manipulated and managed (no deciding HOW they have to be reduced or further grouped) and there’s decent data volume with each one.

In the world of visualization, I think this is a great starter data set.  And it was fun for me because I could focus on some of the design rather than deciding on a deep analytical angle.  Plus in the spirit of the original, my approach was to redo the output of “who’s riding the ferries” and make it more accessible.

So the lowdown: first decision made was the color palette.  The ferry route map had a lot of greens in it.  And obviously a lot of blues because of water. 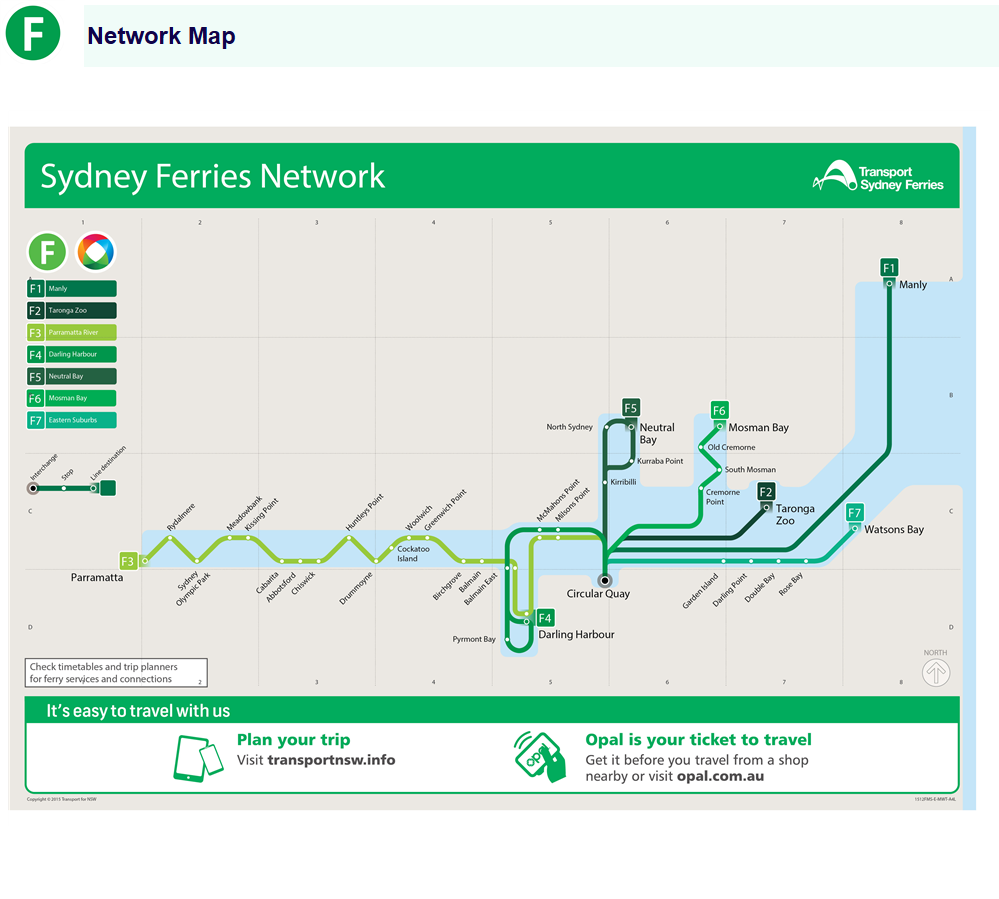 So I wanted to take that idea and take it one step further.  That landed to me a world of deep blues and greens – using the darkest blue/green throughout typically represent the “most” of something. 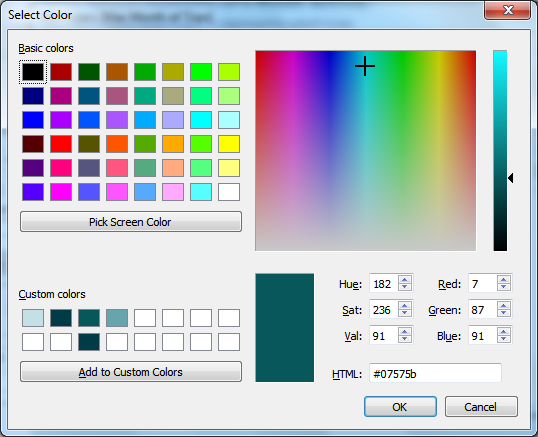 These colors informed most decisions that came afterward.  I really wanted to stick to small multiples on this one, just by the sheer line up of the two medium/small domained dimensions.  Unfortunately – nothing of that nature turned out very interesting.  Here’s an example: 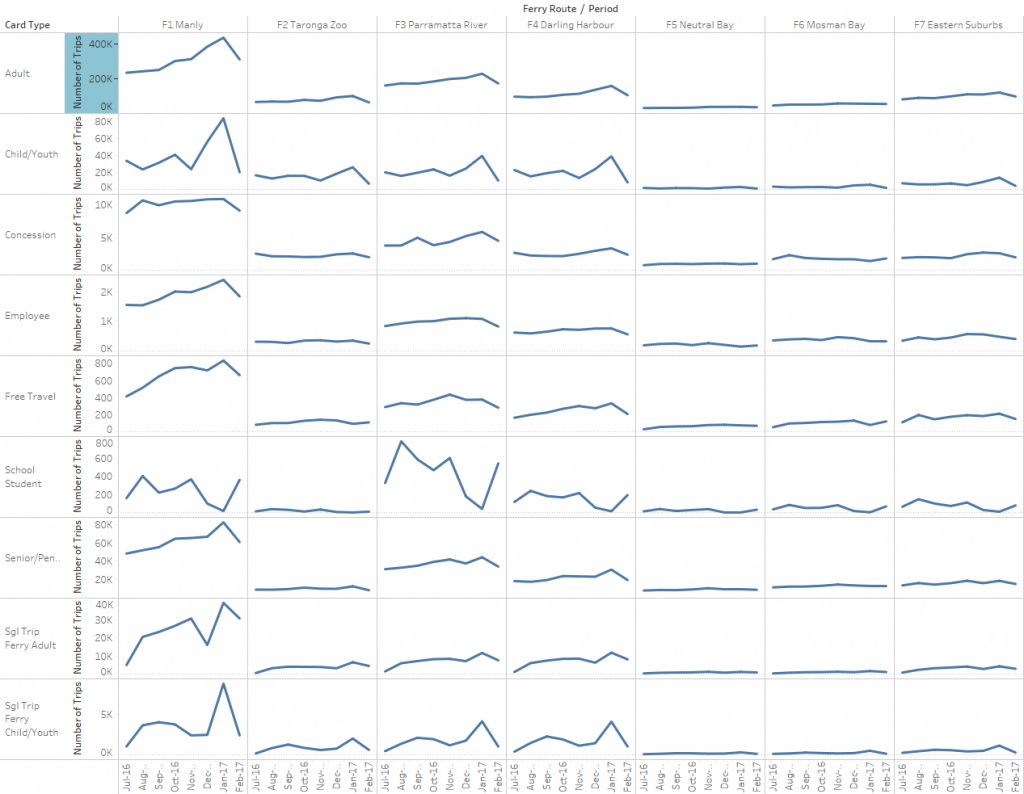 Like it’s okay and somewhat interesting – especially giving each row the opportunity to have a different axis range.  But you can see the “problem” immediately, there’s a few routes that are pretty flat and further to that, end users are likely going to be frustrated by the independent axis when they dive deeper to compare.

Pivoting from that point led me to the conclusion that the dimensions shouldn’t necessarily be shown together, but instead show one within the other.  But – worth noting, in the small multiple above you can see that the ‘Adult’ fare is just the most everywhere all the time.  Which led to this guy:

Where the bars are overall and the dots are Adult fares.  I felt that representing them in this context could free up the other dwarfed fare types to play with the data.

Last step from my end was to highlight those fare types and add a little whimsy.  I knew switching to % of total would be ideal because of the trip amounts for each route.  Interpret this as: normalizing to proportions gave opportunity to compare the routes.

I actually landed on the area chart by accident – I was stuck with lines, did my typical CTRL + drag of same pill to try and do some fun dual axis… and Tableau decided to automatically build me an area chart. 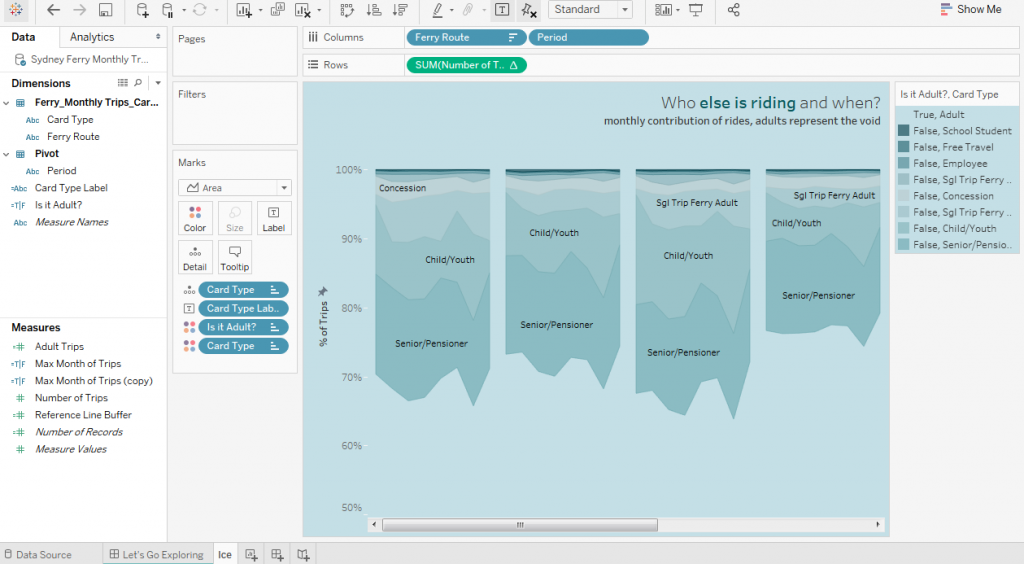 The original view of this was obviously not as attractive and I’ve done a few things to enhance how this displays.  The main thing was to eliminate the adult fare from the view visually.  We KNOW it’s the most, let’s move on.  Next was to stretch out the data a bit to see what’s going on in the remaining 30%-ish of rides. (Nerd moment: look at what I titled the sheet.)

Finishing up – there’s some label magic to show only those that are non-adult.  I also RETAINED the axis labels – I am hoping this helps to demonstrate and draw attention to the tagged axis at 50%.  What’s probably the most fun about this viz – you can hover over that same blue space and see the adult contribution – no data lost.

Overall I’m happy with the final effect.  A visually attractive display of data that hopefully invites users into deeper exploration.  Smaller dimension members given a chance to shine, and some straightforward questions asked and answered.